On a coil coating line, a thermal oxidiser is the process unit for air pollution control. Thermal oxidisers are typically used to destroy Hazardous Air Pollutants (HAPs) and Volatile Organic Compounds (VOC’s) from industrial air streams. The oxidiser decomposes the hazardous gases at a high temperature and releases them into the atmosphere.

Bronx Thermal’s oxidisers are individually designed to ensure your system is perfectly matched to your requirements. Bronx  Oxidisers are designed and manufactured to provide a highly energy-efficient system that meets required high levels of VOC destruction.

There are two types of Oxidisers manufactured by  Bronx Thermal Division:

The recuperative thermal oxidiser uses an air-to-air heat exchanger of metallic construction (usually referred to as the primary heat exchanger) to pre-heat the curing oven exhaust gases before they enter the VOC destruction chamber.

Pre-heat temperatures can vary dependent upon the size of the primary heat exchanger used and typically range from 300oC to 500oC. 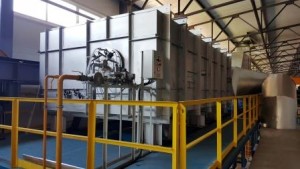 After pre-heating the oven exhaust gasses in the primary heat exchanger, the exhaust enters the oxidiser VOC destruction (or dwell) chamber via the burner chamber where it is heated to 760oC and held for the required dwell time, before being released to the atmosphere.

In a regenerative thermal oxidiser (often referred to as an RTO) the oven exhaust gases flow over hot refractory bricks prior to entering the VOC destruction chamber. The direct contact between the exhaust stream and the hot refractory bricks provides a very efficient method of pre-heating the oven exhaust gases and pre-heat temperatures close to the oxidation temperature of 760oC can be achieved.

On a typical coil coating line application there will be sufficient solvent within the oven exhaust air stream for the auto-ignition of the solvent to generate sufficient energy to maintain the minimum required oxidation temperature without the burner being switch on.

This point is referred to as the Auto-Thermal condition.

After passing through the dwell chamber of the regenerative oxidiser the gases then exit via a second canister full of refractory brick identical to the first. As the exhaust gasses flow over the bricks, heat will be transferred from the exhaust gases into the bricks.

This cycle will continue to repeat itself during the operation of the regenerative oxidiser.

Due to the strict method of stack emission sampling used in some regions such as Europe and Australia, a third canister of bricks has to be added to the regenerative oxidiser to avoid the ‘spike’ of VOC contaminated exhaust that occurs during the flow reversal process.

However, in some countries such as the USA the sampling method differs and although the overall VOC emission limits are the same as Europe the ‘spike’ is not detected during sampling and thus a two canister regenerative oxidiser can be used.

Bronx Thermal Solutions works with its customers to tailor the best and most cost-effective solution for your coating line.

Thermal upgrades to your Oxidiser and / or Oven can be carried out by the Bronx Thermal team to ensure your systems are operating optimally. Recent upgrades on coil coating lines in the UK and Spain have ensured the coil coating lines run more efficiently.

The team work with you to assess your requirements and provide the best solutions for your business.

Get in Touch
Make an Enquiry